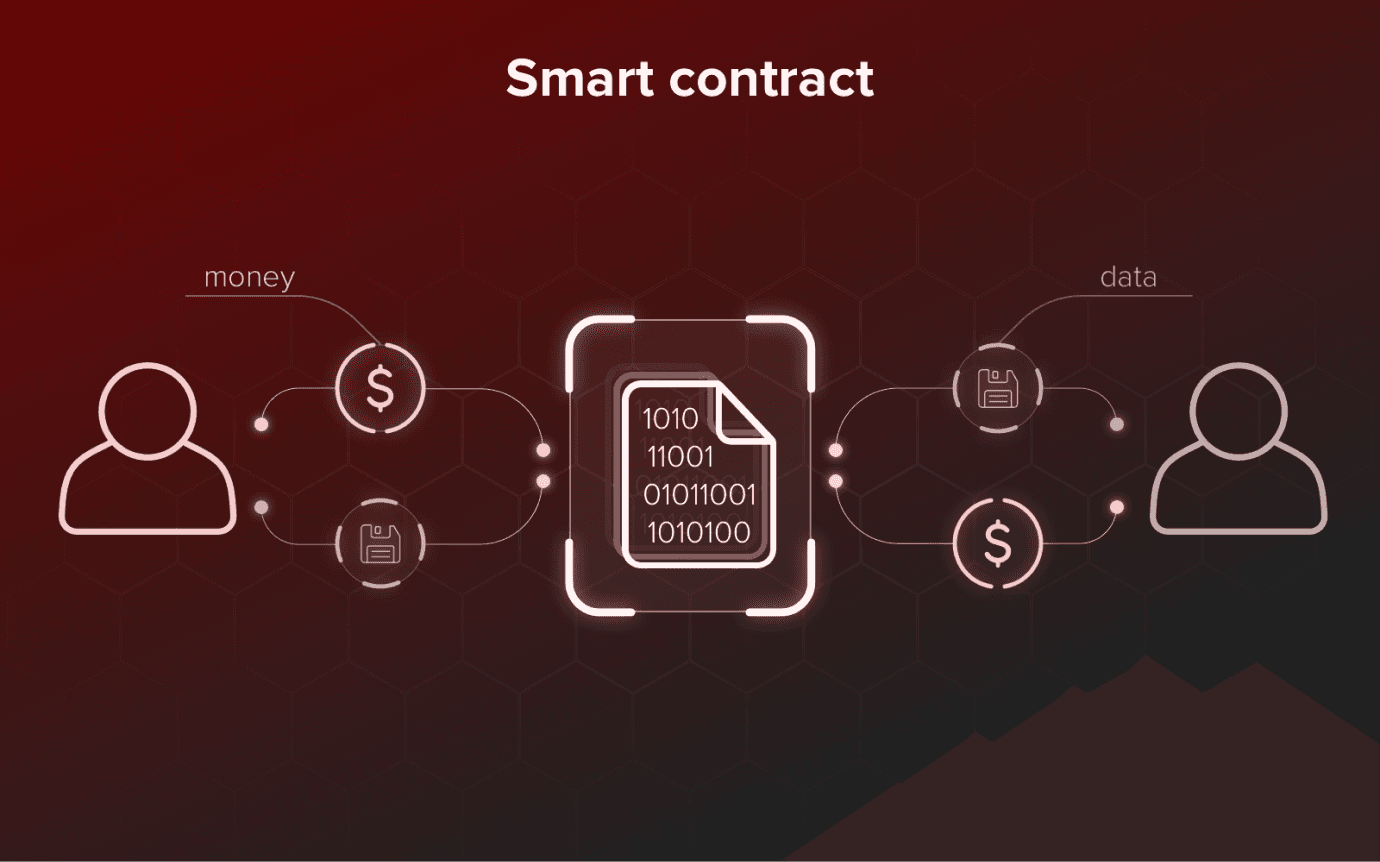 What are Smart contracts?

Smart contracts are automated and simple, they are created based on pre-defined conditions set in the contract. Since blockchain is a distributed ledger technology (DLT) that allows data to be stored on different servers around the world, it relies heavily on these databases to confirm a transaction. Thus, smart contracts can eliminate administrative overhead.

A smart contract is defined by terms written in codes that automatically transfer funds from one party to another once the predefined requirements of the contract are met. For example, when both parties agree to exchange cryptocurrencies, the transaction will be carried out using a blockchain ledger over a protocol tied to a smart contract.

Typically, the main purpose of smart contracts is to facilitate transactions between parties by eliminating the intermediaries involved in traditional business processes. These contracts aim to reduce payment delays, errors, and complexity of a conventional contract without sacrificing authenticity and credibility.

That is, the main distinguishing advantage of such contracts is that they allow you to conduct reliable transactions without intermediaries.

What is the purpose of smart contracts in the blockchain? 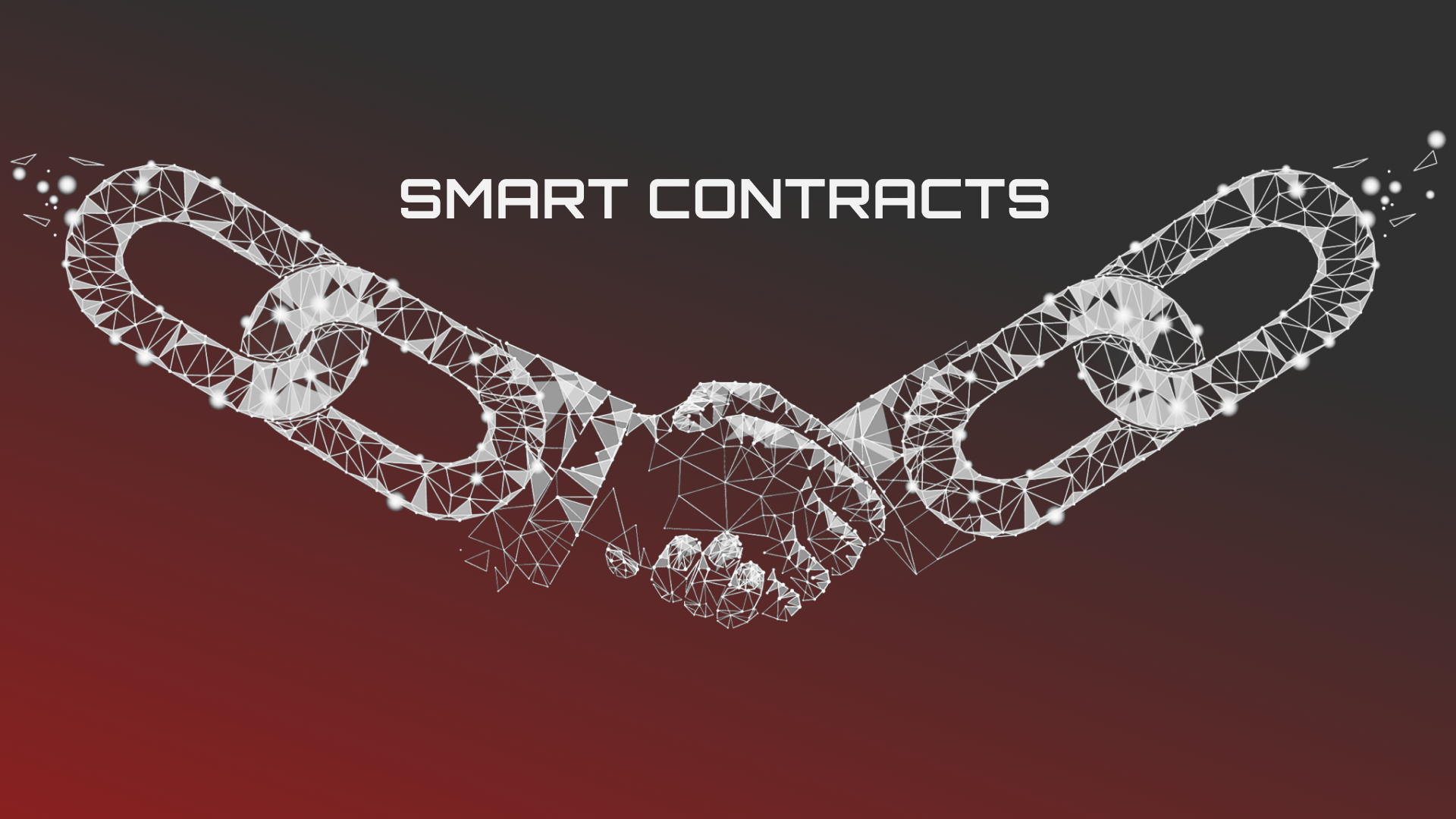 Typically, the main purpose of smart contracts is to facilitate transactions between parties by eliminating the intermediaries involved in traditional business processes such as courts and arbitrators. When the contractual agent requests it, intermediaries compel contracted transfers and arbitrate disputes. These contracts aim to reduce payment delays, errors, and complexity of a conventional contract without sacrificing authenticity and credibility.

That is, the main distinguishing advantage of such contracts is that they allow you to conduct reliable transactions without intermediaries.

How did the smart contracts come to life?

Other authors who wrote on the concept of smart contracts were Ian Grigg and Gary Howland. In 1996, they published their research on Ricardian contracts as part of the Ricardo payment system.

After the appearance of bitcoin and its blockchain, which established the necessary conditions, the development of smart contracts became possible. This technique ultimately debuted on the Ethereum blockchain a few years later. Many alternative platforms now let users to use this feature, however, Ethereum remains a pioneer in this field.

How does it work? 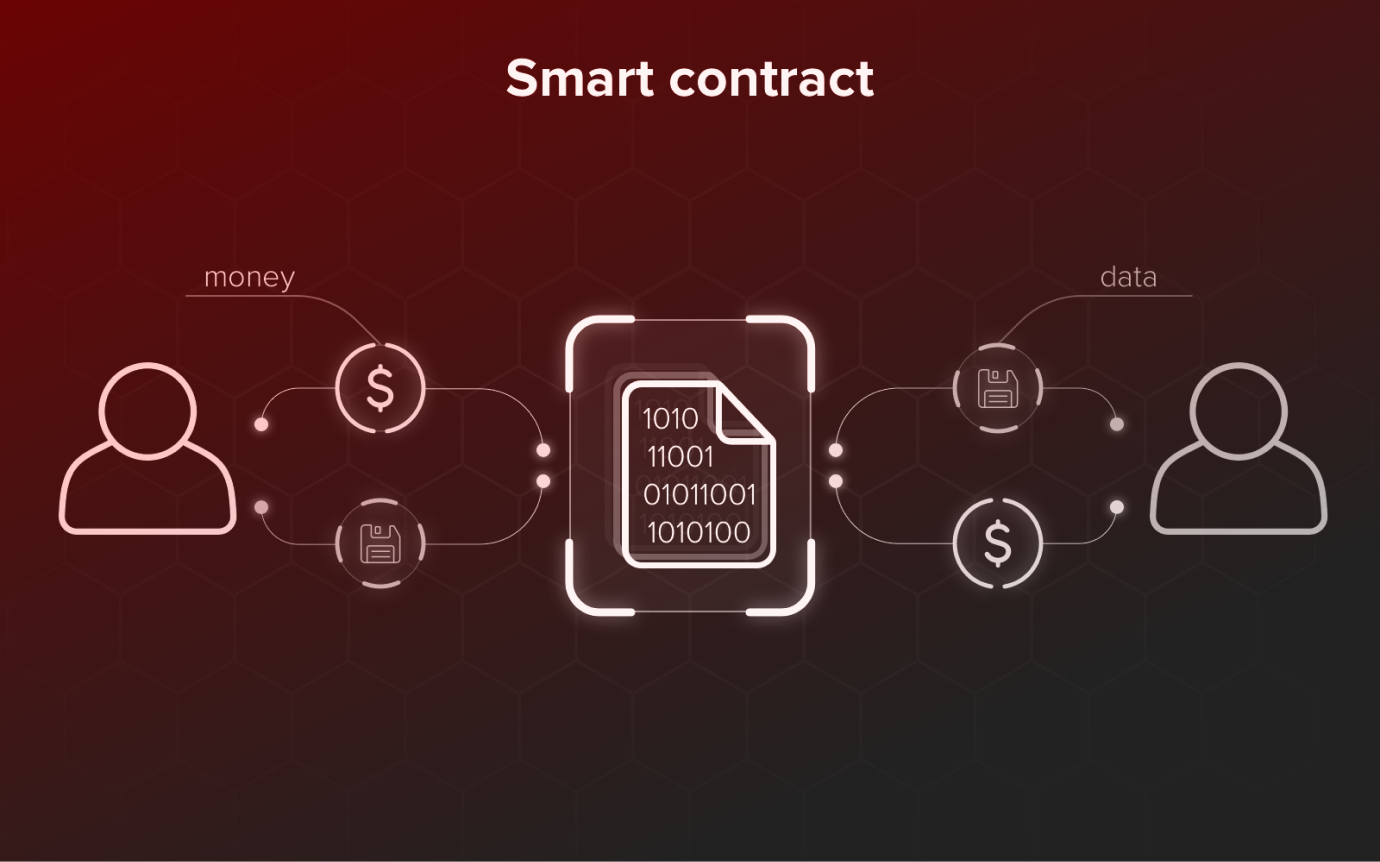 The mechanics of smart contracts have been compared to a vending machine.

Just like how a vending machine doesn’t require a physical vendor, smart contract transactions don’t require intermediaries to manage transactions. If one group’s needs are met, then the agreement can go through.

In more technical terminology, once a smart contract agreement has been instituted between two parties, the two can agree on the conditions in which the smart contract is considered complete.

This decision is then written into the smart contract which is encrypted and stored in the blockchain network.

To put it simply, with the right inputs, a certain output is guaranteed.

Smart contracts not only define the rules and penalties around an agreement but also automatically enforce those obligations. 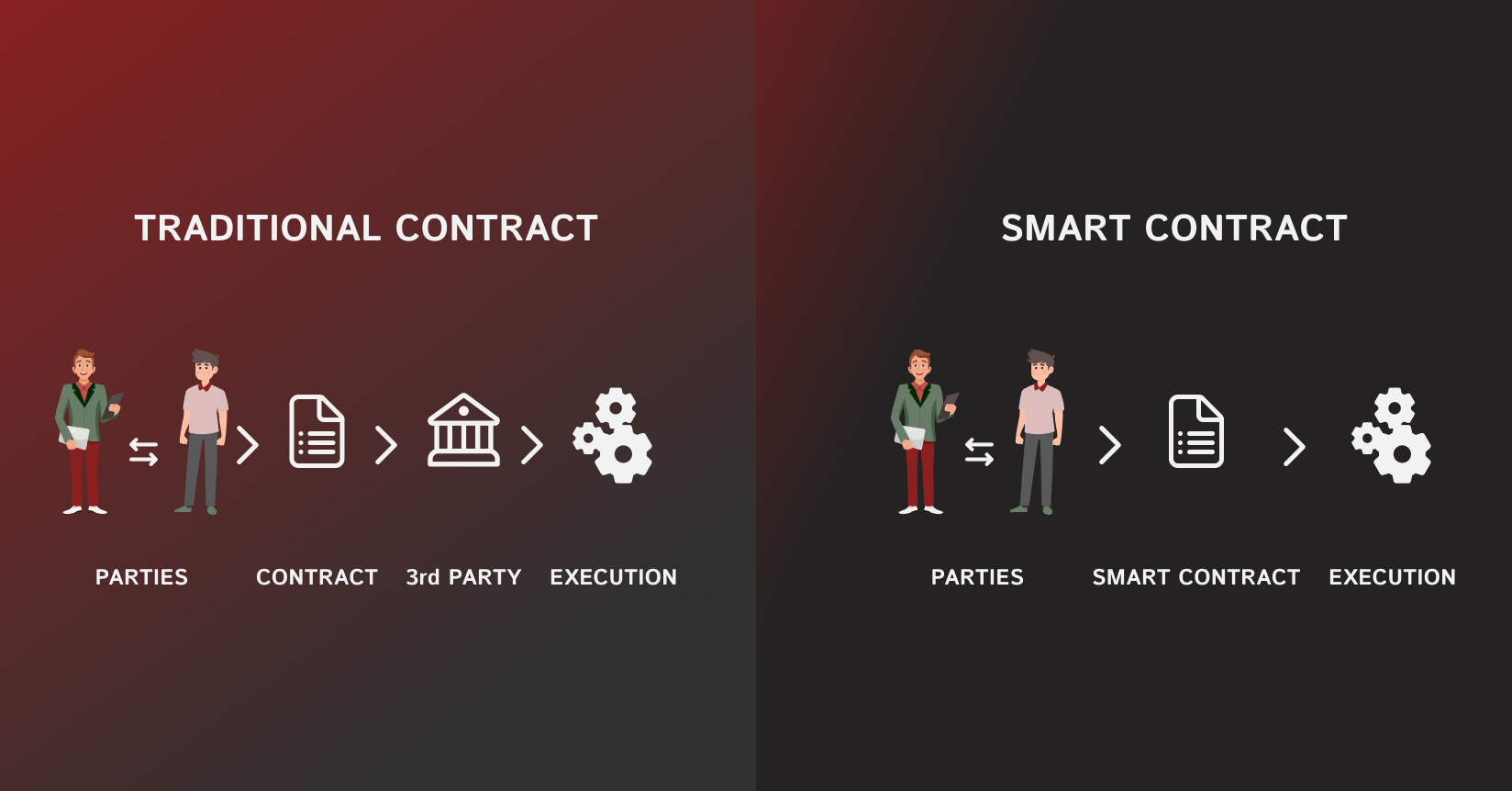 They have a completely independent staging, which does not require any intermediary. Not to be overlooked though is the fact that you don''t need third parties such as brokers or lawyers to accept it. Therefore, there is no potential risk of a third party manipulating anything due to the fact that the management is automated by the network involved. There is a high risk of objectivity involved since the potential biases and errors of individuals are completely eliminated.

Nobody can claim that they have lost something because of the encryption of their documents in a common account book, shared by the parties involved.

The blockchain protects you in this aspect, this means that there are many duplicates of the documents.

Unlike the huge amounts of time you spend processing paperwork manually, smart contracts ensure automation of tasks through software code to save you a lot of time otherwise wasted on endless processes.

Thanks to the absence of third parties, and intermediaries, in this case, smart contracts go a long way in saving you money since you would need to hire a legal representative to check everything while you make your transactions.

There is a considerable omission of errors when using smart contracts. This is due to the automation they incorporate that also adds up to low costs and high speed, compared to filling many forms manually.

The fact that blockchain transactions, and by extension smart contracts are encrypted means that they are very difficult to hack and alter. Because each record is connected to the previous one, hackers would have to alter the entire chain to change anyone''s record.

At the same time, the following topics must be thoroughly examined.

What does a smart contract consists of?

You will be able to use a blockchain-based smart contract after these prerequisites are met. However, the agreement must be negotiated before it can be utilised on the blockchain.

In addition to transferring funds, there are several other use cases:

Smart contracts are useful not only for trading cryptocurrencies but also for everyday tasks in the field of financial services, IoT, and much more. You will be surprised, but they are much more versatile than anyone could imagine.

Internet of things ( IoT ): This is the concept of adding internet capabilities to everyday items in the home. Smart contracts can help users achieve distributed and secure access control to IoT systems.

Labor contracts: Smart contracts can make contract execution very convenient. In the case of human resources, smart contracts will help with employee data such as salary, competencies, and responsibilities. All this information can be easily recorded. At the same time, the transparency and immutable characteristics of the smart contract increase trust between employer and employee.

Logistics and supply chain: Traditional supply chains are heavily bureaucratic and have to go through numerous channels for approval – which increases exposure to lose and fraud.

Executing smart contracts on the Blockchain nullifies all this by providing a digital, secure, and accessible version to all parties in the chain – automating tasks and payment.

Copyrighted content: The content owner must be paid, but it is often difficult to verify who the actual owner of the content is, as many parties may be involved in the creation of a single work. Smart contracts make it easy to understand rights and obligations at any stage of the creative process.

Financial sectors: With the advent of cryptocurrencies, the number of financial applications utilising smart contracts has increased exponentially, such as systems that conduct auctions, which automatically check for the largest bet within a certain period of time, reimburse participants, and conduct decentralised lotteries, among others.

Nowadays, smart contracts are implemented on most Blockchain platforms, to varying degrees. The following are some examples of protocols or platforms that can be used to create smart contracts

Bitcoin: The Bitcoin blockchain allows documents to be processed by relying on smart contracts. However, Bitcoin had serious limitations in this regard, as the smart contracts supported by the network were very basic. Bitcoin itself had as its main characteristic the mere transfer of values, but the network had no structure to execute more complex contracts.

NXT: NXT offers templates for smart contracts. However, there is a limit to the choice, because there are not many options for customization.

Ethereum: Ethereum thrives on smart contracts as it supports advanced coding and processing with sufficient flexibility and efficiency. However, the disadvantage is that it is rather expensive. Suppose you want to set up something, then you will need to deposit ETH tokens as payment for computing power in order to complete the operation.

Stellar: It may be the oldest smart contract platform, but its speed and security is arguably better than Ethereum. It boasts an easier-to-use interface. However, the platform is not suitable for developing complex contracts, as it is mainly intended for executing simpler smart contracts.

Cardano is a smart contract platform similar to Ethereum that focuses on security through a layered design. It is the first block-by-block initiative based on peer-reviewed academic research and derived from a scientific philosophy.

Some of the most popular applications based on smart contracts are online financial platforms like MakerDAO and Compound, decentralized exchanges like Uniswap.

What the future holds

Smart contracts are popular and in will be widely used in the far future. That doesn''t mean they will totally replace traditional contracts, but they will diminish their use in the market, particularly when purchasing or exchanging goods, services, and rights. They will, without a doubt, infiltrate new sectors of people''s life.

Many countries'' legal difficulties will be settled in the upcoming years; this is unavoidable. Even today, Arizona and Nevada have revised their state versions of the Uniform Electronic Transactions Act (UETA) to incorporate blockchains and smart contracts expressly.

What sectors (companies) are smart contracts being used?.

Smart contracts have been widely used ensuring a great reception by the entire industry. SWIFT and the US Postal Service have already inhabited the use of smart contracts in their networks.

Fizzy AXA: It was created in 2017 and guarantees flight delays on the Ethereum blockchain by the French airlines. Smart contracts fully automate all elements of the claims assessment and payment process.

Propy: is one of the first firms to make the smart contract a reality in real estate.